We’re at the very beginning of an electricity revolution that will upend 8% of our GDP, and no one is talking about it.

Not the transition from fossil fuels to sustainable sources, though that’s well underway and critical to our future. The writing is on the wall that the end of the centralized electric utility model we’ve had since Edison is nearer than we think.

Even Warren Buffet is concerned about his utility investments.

"In its electric utility business, our Berkshire Hathaway Energy (“BHE”) operates within a changing economic model. Historically, the survival of a local electric company did not depend on its efficiency. In fact, a 'sloppy' operation could do just fine financially," wrote Buffett. "That’s because utilities were usually the sole supplier of a needed product and were allowed to price at a level that gave them a prescribed return upon the capital they employed." "That’s all changing" he writes in his annual letter to Berkshire Hathaway shareholders.

Currently we have a utility model whose single fault points, centralized control, and unidirectional electricity flow create a very brittle and static network. In its place a decentralized network is emerging in which the power and control is pushed from one centralized controller to every edge of the electricity network. Instead of the vast majority of homes and businesses on the grid being simple consumers of electricity, each property can be not only a consumer but a provider of electricity. Unlike the brittle centralized network that causes rolling blackouts and wastes enormous capacity to support peak electricity needs, this decentralized grid will have the flexibility and resilience of the Internet.

The Demise of Centralized Power Is Not An If, But A When

You combine this price advantage with the consistent 10% annual cost decreases that on-site solar systems have experienced over the last decade, and simple math shows that within 10 years centralized power generation will not be able to compete with on-site solar generation on price. Within 20 years even entirely free centralized power (e.g. we figure out cold fusion) will not compete with on-site electricity generation. These simple economics will drive an enormous increase in on-site generation over the next several decades in the United States.

The Empire Strikes Back

Forward looking utilities have already seen this threat and are working to slow the tide. One of the most popular countermeasures to the increase in solar onsite generation is changing the pricing model of utilities, which for decades has been charging an all-in price per unit of electricity consumed. Instead, these utilities are fighting state by state to separately charge for electricity generation and for the other grid services utilities provide (you might have read recent reports of net metering tariff changes in states like Nevada – here’s some further reading from Green Tech Media). This most often takes the form of a minimum charge or baseline fee for a grid connection. Ironically, though this is a reasonable and even fair approach, it foreshadows the utility's inevitable demise. Once the price of the grid is made explicit, distributed grid services like storage will have a price point to undercut.

The decreasing cost and increasing manufacturing efficiency of electricity storage, exemplified by Tesla’s Gigafactory, will complete the disruption of the centralized electric utility model. Just as solar pv panels continue to get cheaper and cheaper every year, moving down a technology cost curve that is as ruthless as it is predictable, the cost of storage will continue to get cheaper and cheaper every year (chart below to illustrate the declining cost of storage). Within several years, the combination of onsite solar and onsite storage will be cheaper than a centralized electric utility can compete with, and our electricity infrastructure will increasingly move from centralized control and generation to a distributed network. 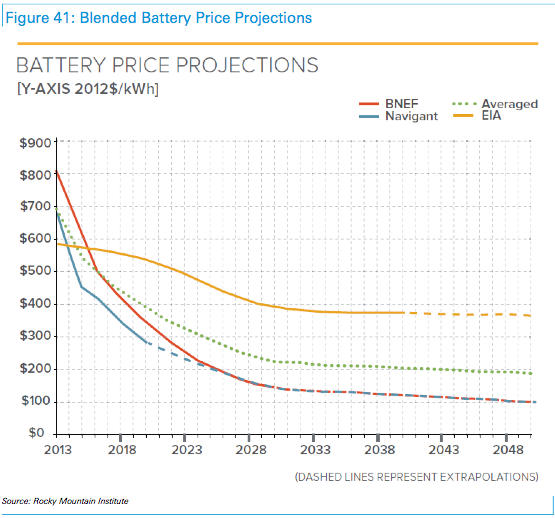 The Utility of the Future

In this inevitable future reality, what is the role of the utility and the billions of dollars of grid infrastructure installed across the U.S.? The good news for utilities is that just like the Internet Service Providers, there is a lot of value in connecting all of these disparate nodes. Each onsite solar system and storage unit becomes much more valuable by tapping into all of the other resources around it. In this transition, enormous portions of the current electricity market will move to the consumers and businesses that today are captive, and to the manufacturers, installers and financiers of onsite solar and storage that will facilitate this revolution.

This article was written by Bryan Birsic, Co-founder and CEO of Wunder Capital. Wunder Capital is helping to accelerate the proliferation of solar by financing the commercial solar revolution. Wunder also offers investors a great way to invest in the future of energy. Learn more about Wunder by visiting WunderCapital.com.